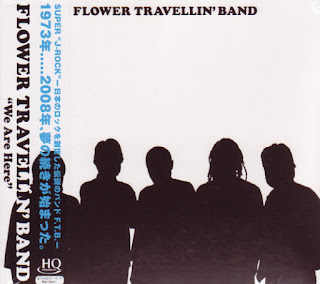 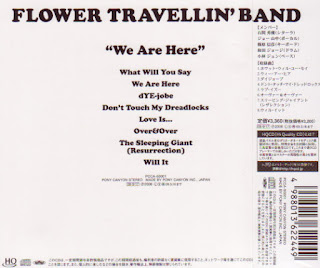 In its hayday, Flower Travellin’ Band was Japan’s answer to Led Zeppelin and Black Sabbath. With “We Are Here”, Flower Travellin’ Band has become Japan’s Maroon 5 Knockoff. Gone are the impressive, guitar-driven, acidic riffs and the heavy blues infusion. Hideki Ishima has shelved his near-hendrix virtuosity in favor of a more commericial, pop, backing-guitar sound and the rest of the band followed suit. We Are Here’s mundane, silly lyrics are a sterile substitute for those of Flower Travellin’ Band’s golden age. We Are Here is a sad disappointment for those fans who were expecting the glorious return of this legendary guitar-rock band. Flower Travellin Band’s style of hard rock has now devolved into a soft sponge. …….by The Cerebrator………
Originally envisioned as a female-fronted Japanese heavy rock cover act called the Flowers by entertainer and “entrepreneur” Yuya Uchida, the Flower Travellin’ Band would eventually chart their own course, becoming an underground influence on later metal acts, and counting one Julian Cope as a disciple. As the Flowers, (original) vocalist Remi Aso, guitarist Hideki Ishima, bassist Jun Kowzuki, and drummer Joji Wada released their debut, Challenge, in 1969. Consisting entirely of cover versions of Western pop/rock songs, the album got attention not necessarily from the music, but from the fact that the entire band was photographed in the nude on the cover. Uchida and Aso left after the first album, leaving the band to reorganize with new vocalist Joe Yamanaka, and allowing it to explore more original and experimental avenues. Their first album as the Flower Travellin’ Band, Anywhere, was released in 1970. The album featured five covers, including Muddy Waters’ “Louisiana Blues” and Black Sabbath’s “Black Sabbath.” Again, the bandmembers appeared nude on the cover; the difference this time was that they were on motorcycles. Their first wholly “original”-based full-length, Satori, was released in 1971. Made in Japan was released in 1972, and a double live and studio set, Make Up, came out in 1973, before the band would go on a hiatus lasting over three decades. By the end of this phase of their career, the Flower Travellin’ Band were opening for prominent acts such as Emerson, Lake & Palmer. Recordings made before the band issued Anywhere would be released in the mid-‘70s under the title Kirikyogen, and 1995 would see a bootleg release of early material under the title From Pussies to Death in 10,000 Years of Freakout. In 2007 the Flower Travellin’ Band reunited – without the involvement of Yuya Uchida and with the addition of keyboardist Nobuhiko Shinohara – and released the album We Are Here the following year. However, in March 2010 the group ceased its activities upon the announcement that vocalist Joe Yamanaka had been diagnosed with lung cancer. Yamanaka died from the disease on August 7, 2011; he was 64 years old. ~ Christopher True…
NO WAY!
Tracklist
1. What Will You Say
2. We Are Here
3. DYE-Jobe
4. Don’t Touch My Dreadlocks
5. Love Is…
6. Over & Over
7. The Sleeping Giant (Resurrection)
8. Will It 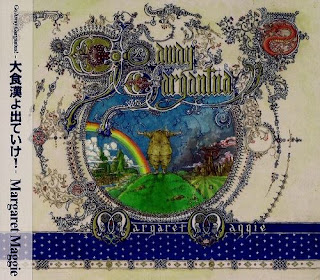